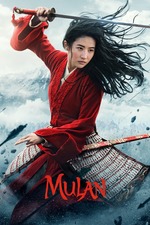 Obligatory I pirated this movie, do not support Disney and fuck HK Police.

There's a lot wrong with this movie. Badly written, unconvincing acting and a cheapened story. Outside of like 3 characters, it felt like each person had only 10 lines for the whole movie, especially Yao, Chien Po and Ling, the way they were introduced felt like they expected us to remember their character from the 1998 movie and already have base for their personalities so they wouldn't have to show us.

Also like trans erasure and baiting???? In this new version, Mulan's entire emotional shift rides on the guilt she feels for deceiving everyone around her and hiding her cis identity. Mulan leans towards presenting as transmasculine for much of the movie and we are constantly shown the "virtue of truth" (on her sword, the captain reading rules, other) that shames her for not conforming to her "true" identity as the one she was assigned at birth. And then towards the midpoint of the movie she just abruptly embraces her womanhood?? Idk if they were trying to bait larger audiences by showing the first part or if they had to conform to censorship laws or smth but the original was so great in it could be viewed as a trans man embracing himself or as a cis woman feeling empowered. Whereas this one
focused almost entirely on her feelings of shame and self hatred.

Things I did like about it were the camera work and effects for fight scenes. The vast majority of the effects were practical (I think, that's what it looked) and felt very reminiscent of older Chinese martial arts movies (like, 'Crouching Tiger, Hidden Dragon' and Stephen Chow films) and the way they handled superhuman movements and such which I adore. The way it's done is inherently goofy looking and I think if they carried that energy to other scenes, the movie would have benefited tremendously, rather the weird juxtaposition between the "serious" writing and plot and the fun fights.
I'm also glad that they removed a lot of the stereotypical jokes and characterizations from the original film.

But they also took out the ultimate bi icon Li Shang. I am livid.