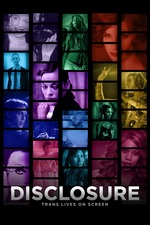 Before I watched this, I told a friend who's hardly knowledgeable on cinematic trans narratives to do a vodka shot if Michael Caine appeared in a raincoat slashing away in an elevator before the half-hour mark.

"Disclosure" means well, and frankly it is quite good, but the talking heads and movie clips that make up this documentary serve merely to check a box for what's underrepresented in the LGBTQ film analysis narrative. It doesn't really strive to reach deeper, nor does it aspire to be anything you don't expect. And so you get a film that does a dance largely for an audience who already knows the moves by heart. Twenty years ago, this would've been enough, simply for this film to exist, but in 2020, a movie like this needs to raise the bar. And in some ways, "Disclosure" doesn't even seem to know its subject well enough. Several prominent trans storylines that shaped the 1990s (Hedwig among them) are totally absent, and more recent breakthroughs like "Tangerine" are acknowledged, but don't get their deserved moment either.

When it comes down to it, we've heard this all before. Apple told much of this story, and then some, in their woefully underrated docuseries "Visible: Out on Television" only a few months ago.

Perhaps I'm expecting "Disclosure" to shoulder too much responsibility. And despite my harsh criticism, there is an upside: with a movie like this on Netflix, a perspective on the experience of trans people is now easily accessible to cisgender and straight people across the world. It may open their eyes to the fact that transgender people exist as humans with nuanced stories and not just a boiling pot for a political conversation. Of course, that's assuming they click on it.

Back in the 1990s, when "Celluloid Closet" was a revelation for the queer community, having trans lives taken seriously by Hollywood is something we could've only dreamed of. Most films of this ilk were relegated to a single VHS copy at the local Blockbuster, if they were lucky.

So does that make "Disclosure" worthwhile? For sure.

Does that mean it's everything it could've been? Certainly not.

I just wished it strived to be more of the change it wants to see.