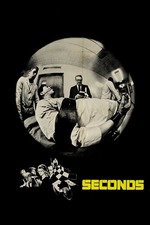 A question for you: If you felt you’d lived out your life and had nothing ahead to live for, and you had a decent chunk of change to fund it, would you allow your death to be staged and take on a new persona in a new body? Given a fresh start and no responsibilities beyond your own new goals, would you give up everything you have now?

One would expect consequences, even beyond the obvious. Would you be able to forget what you built in that prior life? Could you truly think any differently even though you’ve assumed a new persona? What if you don’t get it right the second time either? All of these concepts are explored in Seconds.

There are times when the movie feels HUGE, with a sprawling, secret organization running this life-altering procedure with seemingly no limit to their resources or skills. But it’s the other times - when this organization shows its one flaw - lack of control over the mind of its clientele - that really make this more of a study in philosophy than just a sci-fi flick about some high-priced body snatchers.

Seconds would be perfect if not for a long drunken segment in the middle that I suppose was used to compress the rapid decline in the main character’s new life. It seems very out of place with the rest of the story, complete with full frontal nudity - in 1966, in a mainstream film! I guess that’s exactly why it was done the way it was, to show the contrast in lifestyle between the old life and the new. Still, I wish it were done differently, it’s an awkward ten minutes and takes some time to get back on the rails.

I’d recommend this to anyone dreaming of living another life. It might not be the dream you think it is.