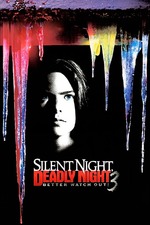 Not as bad as the second one but still bad, for completely different reasons. While the first sequel was a lazy rehash of the original with a rushed and terribly acted second half, this one is just plain boring. It desperately tries to create complex characters (the lead heroine is a snarky, blind psychic), at the cost of pacing the way we enjoy in the slasher genre... and it just barely even sneaks in the Santa angle that was SO important in the first two.

I’d also like to mention that a FIFTH actor is used here to portray the villain Ricky!  This guy is the best version of the lot though. He’s a shambling coma survivor who escapes with his clear electronic hardhat prominently displaying his exposed brain bathed in blood. It’s the best part of the movie, quite awesome in fact, and sadly not a big enough part of this draggy film.

So the ranking thus far: the original is by far the best. This one is a distant second, and the second movie will likely forever be in last place.