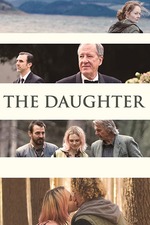 Simon Stone is a first-time writer and director (of features, anyway: he did a bit in THE TURNING), and THE DAUGHTER betrays the latter than the former. While the script has a few business issues (some elisions between scenes had me shaking my head), it's largely strong, with classical drama bones (didn't know it was based on an Ibsen play til the closing credits but it doesn't surprise me in the slightest), and a lived-in feel to individual scenes that didn't make them feel overdetermined, even if the central metaphor of the duck is more than a bit heavy-handed (albeit, of course, imported from Ibsen).

Craftwise, it feels a bit like a first film where either the director wants to throw everything in or lets his collaborators try everything. Photographically we get Dardennes-head follows, a camera literally attached to a duck cage, beautiful scenic wides, mannered static wide shots with bizarre framing, ostentatious handheld work - and I think that's all just in the first five minutes; meanwhile, editorially, we have an intense condensation, where lines appear under takes with the actor not speaking the line, an intriguing tactic slightly undermined by the somewhat poor sound (I'm betting everyone was on lapel mics and they didn't do any ADR.) The score, meanwhile, largely exists to remind us that This Is A Very Sad Drama. None of these choices are ruinous, really, and on occasion they're strikingly exciting, but they do make one appreciate how stripped-back and simple Farhadi's films *feel* by comparison.

If it's a split decision between script and craft, the swing vote, then, goes to the superlative performances. MVP for me is a heretofore unknown-to-me Ewen Leslie, who I apparently saw in SLEEPING BEAUTY but don't recall, and who more than holds his own against Miranda Otto, Sam Neill, Geoffrey Rush, and Paul Schneider, to say nothing of young Odessa Young as the titular daughter, who pulls off a lot of very tricky scenes with aplomb. I'm never going to be the guy who raves uncontrollably about classically-influenced dramas, but this is a pretty darn good one.