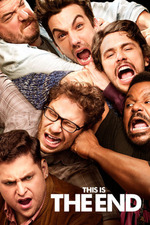 This is the End is certainly a fun film for what it is, but I never shock off the feeling that I’m seeing something truly pointless (which it is) and Seth Rogen’s humor was never appealing to me. The film has a fine premise and admittedly was surprised how well delivered most of the jokes were. Also I have a huge soft-spot for end of the world type of films, which is the main reason why I’ve seen this. But at the end I have a bitter taste in my mouth.

It doesn’t help that the film was incredibly predictable from the beginning to the end. It certainly has some nice spins and ideas here and there, but there was nothing that really surprised me on a character development or story perspective, which was admittedly obvious when you go into films like this, but it makes the experience for me incredibly repetitive. Also the film kind of looks like shit, there are visually interesting aspects about this, but it felt more cheap than professional overall.

Fans of these type of comedies will probably have a lot of fun with this, but after hearing about this film being surprisingly some revelation I fairly have to say that it was a disappointment. It’s fine, but This is the End just delivered with it’s meta-humor for me.

Also...if heaven looks like this I would prefer to be in hell. Just sayin’