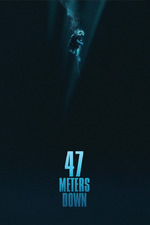 Could be spoilers and stuff. You shouldn't care.

Metre 8 - sure we'll go with you on a shady underwater shark tour hot Mexican boys!

Metre 9 - yet even more foreshadowing

Metre 11 - Your ex will think you're boring!

Metre 19 - And I'm just gonna chuck some blood and dead fish in the water to lure the sharks which is totally illegal!

Metre 22 - Your ex will think you're boring!

Metre 27 - Shark: Dude, did you not see my foreshadowing ass?

Metre 31 - Now I'll just leave this cage to swim up a bit in this shark infested water.

Metre 36 - Should I mention the sharks now for the millionth time just to be sure everyone gets it?

Metre 37 - Creepy Captain: Get back in the cage nitwit, sharks are dangerous!

Metre 38 - Touching heart to heart about ex boyfriends and whatnot at 47 metres down. In a cage. Surrounded by sharks. And running out of air.

Metre 41 - Is that creepy Mexican guy going to save us?

Metre 44 - Shark: Hah! Look at me totally jumpscaring your ass and eating Mexican food! I warned you!

Metre 45 - Listen Shark, we're far too busy verbally explaining every single thing we do and wasting our air in the process, ok? Jeez.

Metre 46 - we're saved! Oh no we're not....but Creepy captain is dropping down oxygen tanks which he says is dangerous because it might cause us to hallucinate . But that's never gonna happen, right?