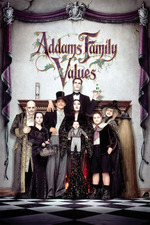 This seems to be one of those rare films that surpasses the film that came before it.

I never cared much for the Addams Family and while I appreciated what they tried to do in the first film, it ultimately left me bored. This film, however, seems more in tune with itself, understanding the universe a bit better. It is because of that, that the humour is a lot more tongue in cheeck and all the actors seem to inhabit their characters just a bit better, with Lloyd being the absolute standout.

It is a bit sillier, darker and more diverse than the first film. It also looks a lot better, which is strange seeing as there are only two years in between them, then again I guess more money makes all the difference.

I don't think I'll ever really warm to the Addams Family, but this was still entertaining enough.