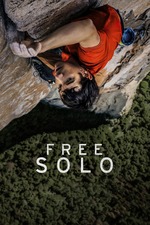 I don't know what impressed me more, Honnold's resolve to do what he did or the crew's resolve to stick with him and meticulously document his every move. Quite beautifully I might add.

I'm not afraid of heights, but whenever I see free climbers at work I always feel the height, or perhaps more the pull of the abyss, in my gut. Add to that the insanity of doing all that without a rope, well let's just say that caused levels of adrenaline I don't get that often while watching a film.

Free Solo is an exploration of an obsessed mind. As a character study it is sometimes as frustrating as it is inspiring. Honnold is an intriguing, eccentric man, whom it is very difficult to connect to, especially because we see him keep everyone, his girlfriend included, at a distance. But still, there is something about him that keeps pulling you back in. Whether it's his intelligence or unbelievable climbing skills, I kept wanting to understand him.

The narrative is cleverly structured. It keeps you glued to Honnold's preparations and accompanying struggles and doubts and beautifully leads us to the apotheosis, Honnold climbing El Cap. And because we're invested, it turns into an unbearably tense sequence, even though you probably know how it's going to end.

Free Solo is an impressive and inspirational film. If you're not afraid of heights that is.