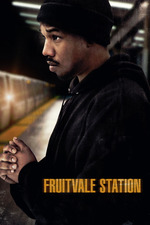 This film seems to be in constant conflict with its real life roots and its dramatized plot.

Make no mistake, Coogler's debut is absolutely promising. He shows raw talent and there is absolutely no doubt about his intentions here. They are honest and sincere. It just feels a bit like his feet weren't really big enough yet to fill he shoes this story represent.

In an attempt to ground and strip down the final moments leading up the fatal incident in the life of one young, black man, Coogler strays a bit too often from the austere and realistic tone he begins with only to end up making a couple of choices that pluck and tuck a bit too clumsily at the heartstrings. The concept is intriguing and for the better part pays off, the execution is sometimes too obvious. We do not need foreshadowing in a tale of which we already know the end.

Having said that, it does pack a punch and that is mainly due to what could be the strongest male performance of 2013 (at least of the ones that I have seen so far). Michael B. Jordan is absolutely amazing. His portrayal of this young man is what lures you in and keeps you invested. His performance is truth in that he gives us a character without frills, without an actor's embellishment. It is because of him that I cared, a truly astonishing accomplishment.

Jordan's performance and the stonger parts created by the choices of Coogler are what, in the inevitable end, make this film about the man, not the ramifications this tragic incident might have brought forth. And that sentiment, without judging anyone involved in the incident, is this film's most admirable achievement.