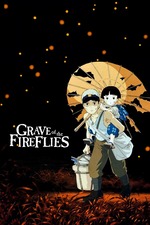 This film is unrelenting in its portrayal of the horrors of war and the loss of innocence.

Grave of the Fireflies is a beautifully constructed tale that is a unique achievement in both storytelling and artistic vale. It tells a story of a brother and sister who try to survive in a world that makes no sense, where adults either abandon them or fight each other. The older brother tries to take care of his very young sister as best he can, but we are constantly reminded that he, himself, still is a child and is not ready to carry such responsibility.

We are shown from the very first scene how this film is going to end and that dramatic effect adds a stunning and deeply moving tragedy to everything that is shown to us. Make no mistake, this film is uncompromising in the depth of its tragic narrative. See, as noble as the boy's actions are we already know they are pointless. He tries to make the war invisible for his sister, to hide the death around her and he succeeds in doing just that for a while. The scenes in which they are together and build up their own little world inside the bomb shelter are some of the most beautiful and heartwarming slices of cinema I have ever seen.

What makes this film work and adds strength to the drama is the fact that there is no storytelling veneer. It is told in a rather sober fashion, with outstanding pacing. If you let it get under your skin it will stay with you for a long time and that has everything to do with the fantastic characterization, the stunning visuals and the great respect for the story it's telling.

I immediately fell for the little girl. The way she is drawn, her expressions, her actions and her sobering utterances just felt very real. The fact that she comes across as a real person made this film get to me. I cared. For a drawing. Rationally, that makes no sense, but there is no rationale in the essence of a child. Draw it, act it, write it, sculpt it, it doesn't matter. If you manage to capture it, it is always disarming, engrossing and in this case deeply tragic.

The animation is just absolutely amazing. The eye for detail and the use of light and dark give this film a gorgeous aesthetic. Animation is just one half, the other half is comprised of the direction. There are a couple of scenes in this film that are directed with such great skill that they leave and incredible lasting impression.

I was emotionally exhausted after watching this, but also fulfilled. See, this film does manage to show us the innocence of a child and allows it to linger and remain in a state of grace, forever playing, dancing and loving. And even though it is a small comfort, it is one I will gladly take and really need after watching this beautifully horrific masterpiece.