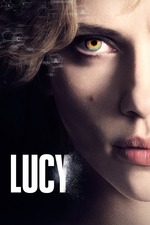 'Luuuuucy! You got some 'splaining to do!!'

The dumbest film ever made about brain power. The irony is overwhelming. It must be excruciating for Johansson to have appeared in both one of the best and one of the worst science fiction films of the last couple of years.

Lucy is pedantic, preachy and the epitome of wankism induced twaddle. Seriously, the kitchen sink speculations Besson has Johansson and Mr. human voiceover Freeman spew forth are clearly not written by someone using even 5% of their brain capacity. It is for that reason I refuse to believe this is some sort of camp, self aware silliness. No, it's the product of someone who thought of an interesting premise and did not have the skills to elaborate on that premise. Sure, it looks purdy, but so does that gorgeous wrapping paper of that crappy Christmas present you got.

The first ten minutes or so of this film show just how highly Besson thinks of his audience. I'll give you an example. Lucy is asked to go into a building to do something for a friend. We see Lucy look at the building which is followed by a quick shot of a mouse walking into a trap. Wow. Really? Ya think? And just in case you'd think he only does this the once, think again! He then goes on to follow the well trodden path of just about any and all generic action/sci fi film ever made and does absolutely nothing with his initial intriguing idea. Nope. We need gunfights, telekinesis shenanigans and other random violence to drive the plot forward, interspersed with that voiceover guy giving some lecture on what the plot is all about making super extra sure we really really really understand what it's all about. And in case you're wondering, HE ALSO USES PICTURES TO EXPLAIN WHAT HE'S SAYING!!! ISN'T THAT GRAND????

The way the increase in brainpower progresses could actually be something interesting and it isn't that bad in the beginning. It unfortunately turns into an excuse for cool visuals and more kitchen sink wisdom a bit too quickly. The choice to have Johansson act as a reject from the Rain Man auditions doesn't help either.

What also doesn't help is the ending. I started to get rather pissed by it, but then the following sentence popped into my head, melting my anger away with greatest ease. 'To become fully human and use 100% of your brain is to become a USB stick.' Yup, That'll do it.

I did not love Lucy.

Executive producer for this review was Chris Burns