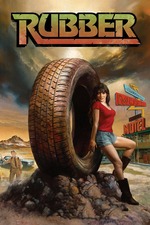 The first 30 minutes or so I really felt that this was going to be my kind of weird. I loved the bizareness of the opening and the subsequent monologue. The first babysteps of the killer tyre were wonderful, but somewhere in the back of my mind a small voice was already starting to whisper things about this being too thin a concept for a full movie. I hate that voice because it's usually right.

An homage to 'No reason'. Starting your film by saying that it will have reason doesn't really give you the right to make it an unnecessarily boring one, devoid of any creativity or sense of direction. Writer/director Dupieux overreaches his grasp as he just can't seem make his ideas and vision concrete. It is stylistically inconsistent, sometimes nailing the absurdity of the conceit completely, but more often than not doing absolutely nothing with that very conceit other than repeating itself constantly.

'No Reason' unfortunately means 'hollow' here. No substance, no energy, no 'spark', leaving me bored and grateful for its short running time.