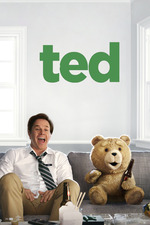 It is impossible for me not to like this film. For two reasons. Before I go into them let me just first say that plotwise this is as predictable as it gets. Really, don't expect anything original there, the only thing original is the idea. The cast is excellent, Kunis is charming as hell, MacFarlane's voice acting is fantastic and Wahlberg completely steals the show in a fantastically timed comedic performance.

So here we go, reason number one:
I absolutely, unequivocally love Family Guy. There is no doubt in my mind that this is a prerequisite to enjoy this film. MacFarlane's anarchic humour speaks to me. Here he is rude and crass as ever, but most importantly, his material is unbelievably funny, relying most of the time on strong dialogue. He is also an obvious film buff and has put some lovely hints and odes to several films in here that I really appreciate.

Reason number two:
Flash Gordon. I love Flash Gordon. I know, I know, it is ridiculous but it's true. I grew up with that film and more importantly with that soundtrack. THe film is campy as hell and a cult classic and I can still recite all the lyrics to the Queen songs. It is not rational by any means. How is this relevant here? Watch the film and you'll find out. Let's just say I felt an uncontrollable desire to hook up my VCR and rewatch my old Flash Gordon tape.