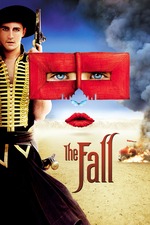 It is easy to judge a director with the visual flair that Singh has on solely that aspect of film making. If we'd do that, we could say that he has more eye for the visuals than for plot and in some cases we'd be right. Here, however, we'd be very wrong indeed.

Story is what drives this film, heck, it's what it's about! This is an ode to storytelling, cinema and love and it is executed perfectly. It is difficult for a film with the story within a story structure to get the balance right, to make both equally interesting. Here, because of the enormous contrast they both have so much to like you won't have to pick favourites.

On the one hand we are presented a story based in realism that gives us a beautiful, if unlikely, friendship that is both touching as it is compelling. The real world problems it deals with aren't taken lightly and are treated with respect, creating some wonderful and intense scenes.

On the other hand there's the parable, the escapist fantasy that reflects and gives insight into what we are shown from the real world. The fantasy, though strange, is not over the top, it is more magic realism if anything else.

The cast is excellent, especially little Catinca Untaru. She is a delight and is totally disarming which makes her a character you automatically root for. Her budding friendship with Pace's character is at times beautiful, at times difficult to watch as they are not equals and Pace abuses this for his single minded goal. Thankfully, it all proves to be more sweet than bitter.

Singh's balance in depicting both world is perfect. He is suitably grounded in the real world and gives us a vibrant, weird world of fantasy. His usual aesthetic and visual bag of tricks are present and are at times a marvel to behold. He just seems to think differently than most directors.

Singh clearly loves cinema. He co-wrote the screenplay for this film, which is based on the wonderful Bulgarian film Yo, ho, ho! What he ads is his unique style and snippets of a love letter to the silent era of film.

Whether good or bad, Singh always brings something unique and extra to his films, a quality I greatly admire.