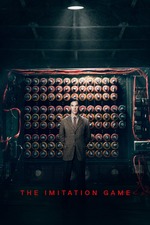 There is something appealingly old fashioned about The Imitation Game, while at the same time that's its biggest problem.

Films about WW2 have always held a certain appeal to me and The Imitation Game hearkens back to those classic 'big' productions that tried to capture and somewhat romanticize what the times were like back then. These films weren't dealing with the gritty nature of war but more with the road to victory already traveled. This film has a sweeping story, bombastic music and a nostalgic sense of style. All these things are done to a high standard and betray a craftsmanship and attention to detail that I greatly enjoyed, making me skip over the more forced dramatic moments without problems.

But this is also another film. It's a biography of a brilliant mind, a man struggling with his identity, his sexuality and his problems connecting to and communicating with other people (I'm not calling it autism as Turing has never been proven to be autistic). The story hops and skips through time in an attempt to paint an accurate picture of Turing and to explore his mind. This is handled pretty well in some areas, but the films just can't seem to decide how far it is willing to go. Is it 'just' a film about an important and intriguing historical event or is it also an in depth biopic. In fact, it's neither and that's a bit of a shame. It only scratches the surface of its main subject (most notably his homosexuality) and when it does try to touch on some tougher issues it treats it with the same British politeness it so beautifully emulates. Even though I think this is, overall, a solid and very well made film, I still feel this is a huge missed opportunity. I think this is most evident in the film's closing text where we get to read some of the events after the film. It clearly wants to respect the man, but it clumsily skirts around some potentially gripping material.

The cast is outstanding, put Dance and Strong in one room and I'm pretty happy, and Knightly didn't annoy me which is no small feat. But Cumberbatch was absolutely superb. I was afraid I would not be able to look beyond the obvious comparison to Sherlock Holmes, but he quickly did away with that by giving us a dedicated and versatile performance. What he does with his voice and his line delivery here is superb. The slight stammer, the breaths taken to articulate the right words, it's truly impressive. Where I was afraid he would go completely overboard on occasion (to be honest, he does do that a bit towards the end), he often managed to show restraint, giving much needed emotional weight to key scenes.

The Imitation Game is a solid, yet light, film that would have benefited from a slightly rougher edge or a clearer idea of what it wanted to be.