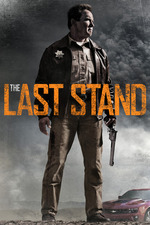 Every Monday evening I go to my local movie theater for the Sneak Preview. There we are shown a film that hasn't premièred yet in the Netherlands and we never know in advance which film we will get. This was today's sneak preview. I list them all here.

Well, whoopdidoo, Ahnold is back!

I have to be honest, I was not expecting to have a good time with this film. And the first half hour or so confirmed my worst fears. This was going to be predictable, cheesy and completely devoid of any originality whatsoever.

Allow me to illustrate: In one of the very first scenes we see Ahnold walking through the town he is Sherrif in commenting to someone that they shouldn't park their big, red, shiny muscle car in a fire zone. Said person says: 'If it's in the way, move it. But please be careful with it' and hands the keys to Ahnold. We know, all of us know, that this car will be used later and that it will get messed up beyond recognition. This is a rule this film has to follow. And it does. To a T. For its entire running time.

But then a funny thing happened. I kind of got caught up in this film's complete lack of identity crisis and overconfident bravado. Watching something that knows what it is, tries to be the best it can be within its own limits and actually succeeding admirably at that had a rather liberating effect on me in so far that it without effort removed the stick up my arse and allowed me to enjoy this film for what it is. A piece of solid entertainment.

I was once again pleasantly surprised by Jee-Woon Kim's visual flair. He has a distinct style of which we get lovely flourishes here. He directs a wonderful final shoot-out that compensates more than enough for the somewhat poor first act and he doesn't shy away from some in your face violence, but never going over the top completely.

I can safely say that Ahnold has still got it. He is old and has no problems showing it. I actually enjoyed his performance here as well. He was charismatic and still has enough in him to pull off the action sequences.

An enjoyable romp if ever I saw one.

Oh, before I forget, this film earns automatic brownie points for having a bad guy in an official shirt of the Dutch soccer squad.