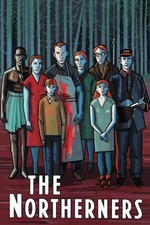 This film is set in the Netherlands in a suburb that was never finished and therefore consists of one street. It is set in the sixties, a time of ignorance and small mindedness in most of the Netherlands. In this film we meet the inhabitants of this street and its neighbouring forest.

Now, this could be the setting for your average introspective drama, providing insight into the essence of a country and its inhabitants. In a way this is that as well. However, this is a film by van Warmerdam, so it isn't average and it most definitely isn't normal. Once we get to know the inhabitants of the street, we know we're in the weird world of van Warmerdam. There is the 12 year old boy who is obsessed with Belgian Congo and wants to be black, so he calls himself Lumumba. His father is a sex-obsessed butcher and his mother a religious fanatic. Then there is the infertile woodsman with his wife who really wants to have kids. Cycling through this all is the mail man who reads everyone's mail and manipulates peoples' lives. Enter a group of travelling missionaries returning from Africa and you know wondrous things are going to happen.

The more I see this film the more I like it. I still feel van Warmerdam's predecessor Abel is a better film, but it is a close call. This film is more plot driven, which is so wonderfully absurd while still touching upon some very essential aspects of humanity and our culture.

If you like your films off-beat and uniquely different have a go at this one.