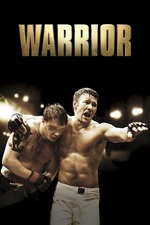 This film has no right to be as good as it is. It is predictable, it is about guys beating each other up, it is a testosterone filled fight film with all the subtelty of a freight train and it is unbelievably melodramatic.

Yeah, whatever, this film (wait for it, there's an incredible pun coming) knocked me out cold.

Films like this don't need to be groundbreaking, they need to be engaging. If Rocky was someone you couldn't root for, that movie would have been awful. The strength of Warrior is drawn from a love/hate triangle that is acted to a standard not often seen in films like this.

Tom Hardy plays damaged goods really well. He is a force of nature here. His single mindedness in and out of the ring is very convincing. Joel Edgerton is, of course, his polar opposite. A smart, sympathetic family man who fights like he is. His performance is fantastic, he is very engaging. I was worried he would not come across convincingly enough in he ring, but those worries were unfounded. (The prequel to The Thing is forgiven, Joel).

And then there's Mr. Nolte. A stellar performance. The man is a beast when he wants to be. If this movie had been bad, I'd probably still give it four stars for one scene where Nolte is drunk as hell in his motel room. That scene shows what Nolte can do if he puts his game face on. It's raw and real. Fantastic.

The fighting is done refreshingly well. There seems to be a trend where directors are convinced that shaking the camera a lot during action sequences gives the viewers the idea that we are participating in the action. They're wrong most of the times. I just want to see what happens. Gavin O'Connor manages to bring across the frantic pace of a fight really well without compromising on the viewing experience.

I really did not expect to like this film as much as I did, but I'm glad I did.