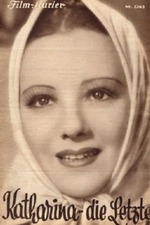 Probably one of the last masterpieces of the (exiled) Weimar tradition: a romantic comedy of social difference. Katharina´s resistance to Hans Holt is pure lumpen class consciousness, unenlightened but powerful nonetheless. Everyone needs to stay on his or her place, because that's the way of the world. She's not even asking for class solidarity, if she's gonna make it, she's gonna make it on her own terms: buying a cow, in order to no longer be treated like an animal herself. Love corrupts class consciousness like it corrupts everything else, but in the end the corruption stays on the level of plot mechanics and can't reach Katharina's pure heart. She loves only insofar as love is not just a game.

Like Dolly Haas in DAS HÄSSLICHE MÄDCHEN, Katharina is a holy fool, incapable of any falsehood, any pretense, and once again it is this very basic trust in the ways of the world, and in surface appearances, that makes her the center of every intrigue. In the end, of course, she who sees through nobody unmasks everyone. Koster doesn't use this structure for moralizing, though, but revels in bittersweet ironies and paradoxies, some of which stay unresolved even after the happy end. The film's biggest stylistic gesture isn't comedic but melodramatic: an elaborate, Ophülsian travelling revealing a break-up letter the illiterate Katharina confuses with (and, by way of her categorical emotional investment in it, transforms into) a token of love.

The art of Koster, but also the art of Franziska Gaal, who just might have been the prime comedienne of her time, a natural clown on the same level as Lucille Ball, but with wider range, a bumbling bundle of sweetness.