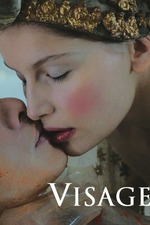 A film that realizes that the statement "everyone's an artist" doesn't constitute a promise but a threat, or rather a curse, because it means that in the end everyone's hidden in the echo-chamber of his or her own artmaking. (Which explains why the scenes with Leaud are the film's strongest parts: he has both the biggest echochamber and the least restraint in making use of it.) It also means that in the end, sex is just another performance piece.

Also: A film that insists that art is completely outside of communication - fine with me in theory, but in this case I didn't understand the necessity to point out this incompatibility again and again. FACE is probably a logical endpoint for Tsai's cinema, and yet for me it's clearly his worst film. The visuals are imaginative as always but they just don't resonate as much as in the rest of his work. (I have similar problems with Hou's FLIGHT OF THE RED BALLOON; weird that the worst film of both directors was produced by Parisian museums).