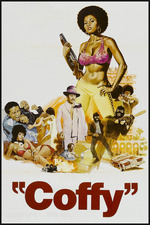 This movie is brilliant. It is technically brilliant, especially in its composition, color selection, and practical lighting choices. It is ideologically brilliant and critical on the front of capitalism, black academia (which is why many of them don’t like it), and feminism. It is an action film about the power of action, both physical and political, in getting things done. And it is imbued with so much soul, so much sensuality, and so much of what makes up Black people that it is specific and unwilling to explain itself to the very people that wish to catergorize it. I don’t see this as a genre film. This is very much an art film with more backbone than a lot of American cinema has had before or since. For some, it’s ideology falls apart at the end, but it’s here that the film is smarter than those who criticize it. Yes, Coffy has much to say politically, but that’s only part of what it is about. This Black woman is angry, and her anger is just as much the point as any highbrow analysis the film may lend itself to. Maligned media stereotypes be damned! And respectability politics be damned as well! She is rightfully angry, and this film is rightfully brilliant. With a perfect ending that harkens back to another brilliant piece of cinema.

Knife in the Water