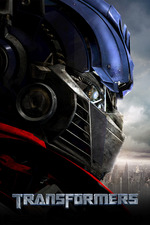 Transformers were a big part of my life as a youngster. I had all the toys and devoured the TV series and animated film voraciously. When this film came out in 2007, I was excited for it. I wanted to see what a live-action version of these robots would look like, and had faith that Michael Bay, backed by a budget the size of a developing nation’s GDP, could do it justice. More than anything, I wanted to hear *that* transformation sound blast through my ear drums in sweet Dolby Digital surround sound.

Transformers showcases some of Bays best and worst tendencies as a director simultaneously. He paints in the broadest possible strokes, and aims at the lowest common denominator wherever possible. He’s simply not interested in wasting time on minutiae, preferring to splash the screen with stereotypes for quick and easy laughs, sticking to loud-talking tough guys and hot dames as the archetypes surrounding the central character, and his fetish for extravagant and expensive military hardware is on full display. This is more a Michael Bay movie than a Transformers one, and for OG fans who had faith he might make a nostalgia trip worth the entry price, there couldn’t be worse news.

The special effects are incredible, the Transformers looking and feeling like they inhabit the same space as the humans, largely helped by much of the effects surrounding the robots being done practically. The transformations are pretty dope too, although not being what I had initially expected, the intricate complexity of the shifts between forms is impressive to watch, and is magnificent work from ILM. The forms of the Transformers themselves could have been better realised though, especially the Decepticons. They feel stripped of the personality that was so thick and tangible in the animated series - here the Decepticons are almost indistinguishable from each other.

What ground my gears the most, however, was the lack of respect shown to the IP in the tone the film took. The humour is crass and base, which was bad enough, but the Autobots are also used as the butt of some unfunny jokes. When Turturro’s character shows up, proceedings enter a whole new level of absurdity. I hope he got paid handsomely for this film, and he must have, but it is an unsightly blemish on an otherwise fine career.

More than it impresses, Bay’s Transformers upsets. It crushed the hopes I held for it 12 years ago, and rewatching it now doesn’t make me feel any better. There was so much potential lost here, and from memory, the series doesn’t do too much to recover. I guess I’ll have to be satisfied with the upcoming Shout! Factory 30th Anniversary release of the original animated film. That 4K scan looks wonderful.