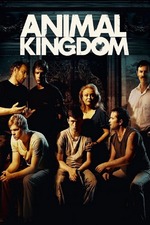 Janine ‘Smurf’ Cody is a woman in control; her dominance, her ability to influence the world around her are what her life thrives upon. So naturally, when her grandson J calls to ask for help now that his mother, her daughter, has died from a heroin overdose, she cannot help but be happy. Happy, not because she has her grandson back, but happy because she has another planet stuck in her gravitational pull.

The brilliance about Jacki Weaver’s Academy Award nominated performance in Animal Kingdom is that this desire for control seamlessly flows throughout the whole performance, even if it is only in the latter act that her tree bears its fully-ripened fruit. In the opening act of the film, simple gestures establish a disguise for her character; the demands of a kiss (which she holds for just a little too long), pauses which linger throughout a conversation with J about his mother (again, for just a little too long). These tiny actions are meant to come across as tender, but behind them lies the beginnings of the rotten core we will soon discover.

The first flashes of a monster start to appear when the freedom of her sons is first at risk. Once her boys are first apprehended by the police, she scolds her son Pope while directing her other son Craig, her tone alternating between a false sensitivity and a threatened anger. Even in the most tragic of times, Weaver’s Smurf picks herself up remarkably quickly to ensure everything in her world remains well within her reach.

And then, in two core scenes, the monster that is Smurf fully reveals herself; two pivotal moments which Weaver manages to manoeuvre flawlessly. The quiet desperation in her voice is matched with a cold, calculated malice in her eyes, demanding attention, insisting on compliance; without batting an eyelid, she manipulates those around her to do her bidding. She ends her performance with a vibrant smugness on her face; once again, her world is in place, each piece fits just as she wanted it to…or does it?

Weaver plays each moment to perfection; there are so many small aspects of the role which most other actors would have underplayed or ignored, yet the intricacies in Weaver’s performance are what build the character. A detailed back-story for Smurf, detailing even her relationships with each of her children’s fathers, provides the ideal guide for Weaver to work within. It is this sort of minutiae which make the performance what it is: an extraordinarily complex and profound embodiment of a dark, highly intelligent sociopath, and a performance worthy of winning the Academy Award for Best Actress in a Supporting Role.