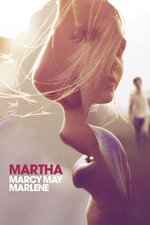 Martha Marcy May Marlene is an extraordinary showpiece for the younger sibling of the infamous Olsen twins, Elizabeth. Her performance in this strange critical indie hit shows remarkable talent and insight, a glorious naturality which just shines in the lead role. A remarkably naive, lost and traumatised young woman, Olsen manages to make each moment count; from one rather terrorising incident to a simple glance towards the horizon, there's such an intense beauty to everything she does with the role and she should definitely have the young ingenue spot in the Lead Actress line-up at next year's Oscar ceremony.

John Hawkes is also menacing; it's not as large a character as I would've liked, but nonetheless every moment he has, he is just enchanting. It's considerably more enticing than his Oscar-nominated performance in Winter's Bone (which I also enjoyed), frightening at times, charismatic at others. His role really doesn't get substantiated upon too much (which is probably the most disappointing aspect of the whole film) but with everything he has, it's a fantastic performance and hopefully one which will get him a few more supporting actor nods this year.

Overall, the film is extremely intense and thoroughly exploratory, though lacking any major release of tension. Durkin shows what a great ability he has, though the film does lack in some areas. Still, Olsen is wonderful and devastating, Hawkes is powerful and all-in-all, it's a thoroughly insightful, intriguing story. Although the film itself probably isn't going to be end-of-year-best level, Olsen certainly should be, and it's great to see such incredible talent at work.

We Need to Talk About Kevin