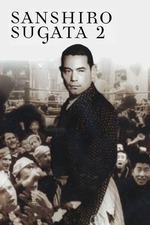 Apparently the first numbered film sequel in history, and it sets a good trend by being a meandering, mealy-mouthed continuation of the first entry, apparently concocted by the people who financed it and not the director, or so I hear. It definitely feels that way.

The token Japan v. America fight is over in a flash; it's clear Kurosawa wants to scratch that off the list and get back to the real meat here, which is a harrowing and eerie confrontation between martial arts masters in a billowing snowfield. That sequence is pure gold, but the rest is forgettable.