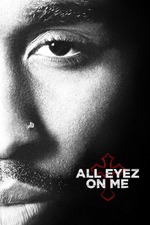 All Eyez on Me

Hours before Tupac is shot to death in a car on a Las Vegas street, he has a disagreement with his girlfriend in a hotel room. He turns around, strides towards the camera, cuts his angle a little weird, and walks into a fern. That's the take they used. That's what I remember about this film.

To be fair, "All Eyez on Me" is trying to tell a story for future generations, and while it's a little one-sided (aren't these biopics generous, usually?) it's a decent document. While you'll spend a couple minutes going "I truly can't believe this is a film I'm watching right now" it's generally entertaining if you're trying to vibe with 90's hip-hop for two hours.

Oh they also get a guy who looks very much like Snoop Doggy Dogg to play him, but then they dub his voice with someone who sounds more like him. It's hilariously disorienting.

Shipp is very, very good as Tupac, emulating his considerable charm on top of a pretty remarkable physical resemblance. Gurira is also excellent as Afeni Shakur. But I'm sort of running out of compliments to pay here.