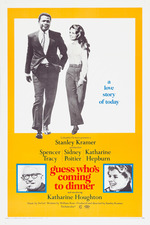 This was a nice change of pace after Play Time gave me ennui and malaise.

I didn't know very much about this (not even who is coming to dinner - couldn't even guess) but Criterion Channel was focusing on black representation in film and I don't know that I've seen a lot of Sidney Poitier. (I believe Busta Rhymes has one record that makes references to both this film and Poitier, but he refers to a lot of things.)

Anyway, it's great. I expected this to be mostly vegetables, and for sure this is a Big Film About Things, but it's entertaining enough. A couple of departures from the main thrust are sticking in my head right now (a car accident on the way back from some ice cream, in particular) but mostly that's just comic relief as tension builds. The butcher delivery guy stopping by the house is the kind of thing I just want to show everyone over and over again.

Everyone's great (except maybe Katharine Houghton - but it's possible we're not supposed to really like her) and the pace is brisk. I suppose it's unwise to cast this as an accurate portrayal of actual conversations about race relations in America at the time, but whether it is (in character and in detail, America did have to navigate these issues) or isn't (and it's what the writer / director / producer wanted to have in theaters to stimulate that conversation) it's fascinating.

(I hate to be a suspension-of-disbelief turd, but the stakes here are driven by one person - Houghton's character - who wants to get married right-now, and otherwise it seems like we have plenty of time to figure out how we feel about things. So while characters figure out What To Do About This, it seems that one unconsidered option is simply not indulging the obnoxious daughter who wants to have a conversation about it with a crazy time constraint. But that's not how movies work.)