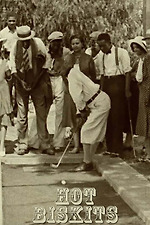 Black people were in fact making movies in 1931, and not like "breaking down the door of white filmmakers" - they were just doing it themselves for their own audience. That's not always accurately understood or explained, so I thought it was cool for Criterion Channel to highlight a couple shorts that predate anything you think you know about black voices in American film.

Couple things: these films are basically destroyed now, so they're hard to watch. Second, they were poorly made in the first place, so there's very much a vaudeville feel to people overreacting to each other and shouting their asides to be heard. Third, the plot (cheating at miniature golf, fucking up the cheating part because your guy is trying to talk to girls, and getting the shit beat out of you because you lost a ton of money that wasn't yours betting on miniature golf) is still very fresh and relevant today.

But you should know this sort of thing exists.