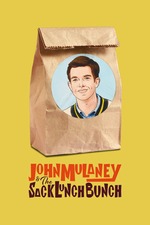 My children are Mulaney fans (?) and, while I like him a lot, I don't have acres of free time like certain high school kids I know. I definitely know him more from Kroll Show / Oh Hello, and a few minutes of stand-up. So an invite to (re)watch this was something I decided I could accept here in the quaran-times.

You should not engage in such delay. It's a riot - I was expecting a stand-up special and instead it's a fairly well-budgeted riff on 70's/80's kids TV replete with inexplicable guest stars. (I am trying to think for an explanation for any of the guests, and - yeah, inexplicable.) Every sketch has the lightness of Mulaney's perfectly delivered asides, but then it's blown up to an absurdity that doubles back on itself.

That said, I would understand if a little is a lot for some people. (Certainly by the end "Mr. Music" has worn out his welcome, but that's also sort of the joke.) But I think you can simply watch the 10-15yo supporting cast - none of which have any business being nearly as bought-in, enthusiastic, or talented as they are. (Seriously: they are so good.) I'm pretty sure this is top-shelf stuff.