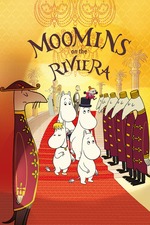 Moomins on the Riviera

I forget where I heard about this, but I think it's like the highest rated family thing on Common Sense Media maybe? It's possible I saw it on Metacritic. Either way that's a weird intersection of not-a-lot-of-ratings, plus computer sorting, and then the film being out of print, which all resulted in a white-whale family entertainment situation for me. I did track it down, and with my children heading to France with their high school French class, I figured we should slot this in for family movie night.

I didn't know the Moomins, but they're children's book characters from Finland. As a result, they come off as sort of unusual and off-center, but in a way that is pretty universal. And I think the people involved have seen other family entertainment. But it has its own sensibility.

Their film is fun and lighthearted and funny. Calm, even. You get a whole roster of characters, none of which are screaming for your attention. I'm sorry, I'm still so stressed out by that Eddie Murphy thing in Mulan.

Anyway, it's worth tracking down, but again that's against the backdrop of this thing being really hard to find in the first place.