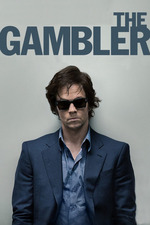 Recovery people will tell you that gambling addicts aren't actually addicted to the thrill of gambling - they're addicted to the rush of losing. In that, I may have given away the plot of The Gambler, which follows our guy through some white-knuckle risk-taking and unbelievably illogical behavior. (Which all makes sense if you realize that he's not motivated the way you or I would be.)

Andy Lunn on here gave up on this film after 30 minutes and I do not blame him in the slightest. I can't even say the second half is redeeming, as gambling addiction is just simply not that entertaining to observe or be around. (The film seems to nod uncomfortably to this fact as the camera drifts from Wahlberg, burning through a duffel bag of 100s, to Brie Larson, who is just waiting it out in time-lapse at the bar for hours and hours.) I feel like I'm trying real hard to give this movie credit it doesn't really want.

But we like Wahlburg, and we sure like Larson, so it's nice enough when they work it out. (They don't seem terribly believable, chemistry-wise.) In summary, not a lot works here as well as it could - not a college basketball subplot, not our guy's rejection of his family (or their rejection of him), not the black-gang vs. white-gang vs. Asian-gang stuff, and not the college professor bit.