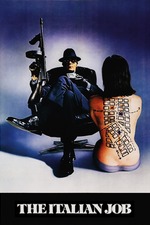 I want to say that I've rented or downloaded or bought the 2003 remake more than once, and never watched it. Then Criterion Channel was focusing on Quincy Jones scores (and recommended this one) and so that was way enough of a motivation for me. No matter, I still walked into this with no real idea of what it was except that it was probably fun and exciting.

It's fun and exciting! I suppose the car stuff felt very fast-paced in 1969, but it's still got stakes and moves along courteously. Caine (minus 51 years! keep him safe in a global pandemic!) has charm for days. The plot is a little convoluted but mostly sticks to the meat - there's some money to steal and they're going to steal it. Lots of weird beats had me laughing out loud, but I was a little tired. I got my 16yo son to park for it, which is awesome. (He likes cars and smart-asses.) I found the ending particularly delightful but I guess that's all I'll say about it.

I didn't know anything about Quincy Jones's career, really, except that he's been on top of the music world for as long as I've been alive. Well, shortly before that, he was making funky, weird soundtracks before black artists were really welcome to do that. This comes a few years into that career, but it's sweet.

I noticed a couple glitches in Criterion Channel's Android TV app - video got tripped up when the audio didn't - but otherwise quality is nice. I would switch to an app on my Samsung TV (ideally) or Xbox One (if necessary) but those don't exist. Still not sure if it's their service, their app, or my (underpowered, for this?) NVIDIA Shield.