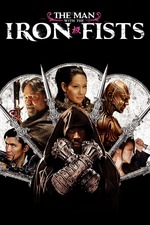 Well this isn't nearly as bad as I expected it would be. You take a first time writer and director (the RZA), give him script help from Tarantino pal Eli Roth, and set them loose on territory perhaps already well covered 10 years earlier by Kill Bill? Frankly that sounds like a disaster.

So I was pleased that it held together. The plot is unnecessarily knotty (reminiscent more of comic book maximalism than kung-fu exploitation), but the film moves along just fine, and is full of visual treats, both at rest and during the generous action scenes.

For a time, you do wonder if Russell Crowe (eating, drinking, laying down) knew he was making a film. And for whatever reason I have never warmed to Lucy Liu, who doesn't appear to be having fun here, but the rest of the cast is charming, taking full advantage of some ridiculously outsized characters. I have yet to see Dave Bautista in something where I don't enjoy him.

I sure hope you're not getting the impression that this isn't trash. It IS. But it's fun.