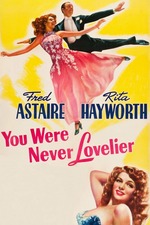 Ah, I've written too much today and I feel like you've already guessed what I'm going to say. Criterion Channel said watch this (they are highlighting Rita Hayworth), I didn't know anything about it, it's fun and light, one of my kids joined me, everyone's charming, etc. etc.

I don't know anything about Rita Hayworth at all, and I am not sure she's the reason to watch this. Astaire is dazzling (I think I've seen an Astaire thing or two) and the rest of the cast is clearly having a blast. Hayworth, though? Eh. I know her reputation was that of the hottest thing on the planet but she's sort of shy and hesitant here, despite being a heck of a dancer. I'll have to check her in a couple other things to see if I'm like a giant fan.

You know who I do sort of know is Xavier Cugat - he shows up if you ask your phone for the definitive non-rock music of the 50s and 60s. What I didn't realize is that his distinctive caricature album covers were illustrated by him - I won't ruin it, but he does the bit live for a scene that screams "1942". Musical numbers with him and his band in it are unpredictable and fun - the reason to watch a black and white comedy with nothing ever really in doubt.

My daughter (10y) did join me. She said that she likes that girls get to pick their own future these days. I got news for you, kid.

Hate to keep pimping for Criterion but this wasn't available to watch anywhere else - I tried. (And my reward is that the screen went weirdly all-pink in a horrible accident at the MPEG factory for a few seconds until I rewound the thing.) Otherwise there was some sort of high-contrast film-grain thing that I fixed by turning the brightness down. The things we do - I suffer! - to watch any film in the history of the planet near-instantaneously at basically no cost.