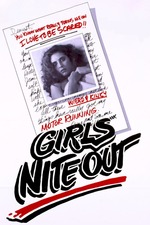 Pretty good for a nearly forgotten slasher film. The cast is energetic and fun enough to watch, and the movie really only gets dull towards the end.

The premise is a killer dressed as the school mascot (a bear) kills a bunch of coeds during a weekend long, campus wide scavenger hunt. The killer is unnerving enough, and more misogynistic than many. There’s little more terrifying than a costumed bear jumping out at you from the shadows while screaming sexual slurs.

Oddly, for a film very much centered around a group of young coeds all sleeping with each other, there’s no nudity at all. The killer also kills almost everyone with the same weapon, which is four steak knives taped together and which leaves wounds much like a bear’s claws. Still, the lack of variety in the deaths is another knock against the film. And the killer’s identity? Ho-hum.