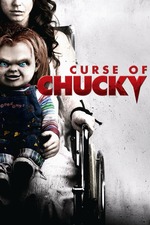 Curse of Chucky is better than a direct to DVD reboot of a dead franchise has any right to be, but in its return to the series' horror roots, it comes across a little archaic.

To give this entry credit, it's probably the most assured horror themed film in the series. It has a few decent scenes where tension is established well and Chucky's antics result in satisfyingly silly, gory payoff. Nearing the end of the film it starts getting fairly wacky and fun, where Chucky is just out in the open terrorising the characters in their hilariously cliched horror movie house.

Though the problem with Chucky is that he isn't scary. The moment he opens his mouth and he starts talking like a angry cab driver, most tension flies out of the window. This means the early scenes of the film where they're trying to make him creepy just come across as boring. I'm so done with scenes of "spooky" dolls disappearing when no one's looking. Most of the dialogue is really stilted as well, making the film's first 30 minutes or so a bit of a drag.

Not as good as the comedy focused films in the series (yes I'll defend Seed of Chucky fight me bro) but this is serviceable horror schlock. Takes a while to get settled due to contrived set-up and run of the mill early scares. But once Chucky is properly unleashed this is good fun. Seems like from the ending the sequel to this that's getting released soon might be more interesting, so I'll be sure to catch that later.