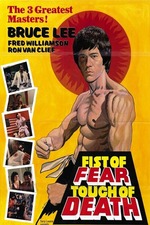 Tons of movies tried to capitalize on the Bruce Lee legacy after the king of martial arts died way too young. This one is a late entry into the Bruceploitation canon- and one among the worst.

Footage from a martial arts contest inter-cut with scenes shot with actor and sports legend Fred "The Hammer" Williamson and martial artist Ron Van Cleef, mixed with old archive footage of Bruce Lee and an anchorman moderation talking about who could be the heir of Lee.

If this would've been a documentary exploring the influence of Lee on the world of martial arts it could've been okay. But it's a mess of a clip show instead and the single greatest moment is when Williamson basically calls the movie out within one of his first scenes.

Note: Even though the movie got never dubbed in German it's available in English on Amazon Germany to stream for free.