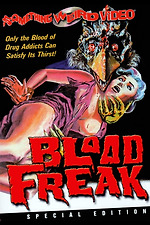 Beyond wonderful and almost impossible to explain, I maybe should have saved this poultry-themed feast for the senses for Thanksgiving, but who could wait? I feel tormented by the prospect of writing about it, because it really has to be seen to be believed. I'm sure I'm committing some sort of grave sin by cheapening it with mere words, but I guess this is what I committed myself to in October, and I have no choice but to go through with it. If you're any kind of person though, you'll turn off this dumb website and just go watch BLOOD FREAK first.

God, I'm already fucking this up.

So, this incomparable 1972 oddity was the third of five films gifted to the world by a Brad F. Grinter. The man began his career by ending the career of Veronica Lake, with a movie called FLESH FEAST about Nazis in Florida trying to reanimate Hitler' dead body. He subsequently directed BARELY PROPER, a movie for which IMDb provides this description, submitted by a guy with a Yahoo email address:

"When it is discovered that a young and pretty schoolteacher is a nudist who belongs to a local nudist colony, she is brought up on trial before the local school board and must defend herself against charges of immorality and the questioning of her ability to continue teaching the town's children."

No such description is available for his fourth film, NEVER THE TWAIN, but the poster features an actual picture of Mark Twain, and the astonishing, and astonishingly literal tagline: HE IS POSSESSED BY THE SPIRIT OF MARK TWAIN AT THE MISS NUDE WORLD PAGEANT. The remaining film is some biker thing of lesser distinction; I admit I'm more piqued by the fact that Mr. Grinter apparently has a cameo in the great SOMETIMES AUNT MARTHA DOES DREADFUL THINGS. Anyway, I haven't seen any of these movies besides BLOOD FREAK, but really, that's enough. If you see just one movie this...um, lifetime, make it BLOOD FREAK!

To my great disappointment, I can no longer find the original Something Weird sleeve for this movie, which included a mind-boggling description of how the events of this film take our hero, and "turn him into a giant turkey head. Yes, a giant turkey head." With this, I give you your last chance to stop "playing on the computer", and go watch BLOOD FREAK before all else.

Sigh. So...little known z-grade Tarzan player Steve Hawkes--who co-wrote the present film--plays Herschell, an abnormally large and "handsome" drifter who meets a nice born again girl named Angel on the highway. Angel takes the similarly pious Herschell back to the home she shares with her sister Anne, in spite of the inconvenience of a full blown drug orgy going on there at the time. Hershell is invited to put down roots there, and this is where his troubles begin. First, Angel and Anne's father offers Herschell a job on his turkey farm, where his job seems to be eating whole entire experimental turkeys provided to him by a pair of scientists for unknown reasons. Meanwhile, Anne does that thing that we all know all drug addicts do, where she angrily insists that Herschell get high with her, day after day, with increasing rancor, until he finally agrees to smoke up all her weed, because certainly the point of drug addiction is not that you really need to keep all your drugs for yourself. It's hard to say which of these two things sets BLOOD FREAK's gears in motion, or if it's a case of two great tastes that taste gross together, but what happens is...well...first, Herschell becomes a total degenerate who goes into violent states of withdrawal if he doesn't get a joint to toke on. Then, he..you know...turns into a giant turkey head. Herschell the turkey monster has little trouble convincing Anne to keep sleeping with him, after she blows through an extremely efficient analysis of what their married life would be like. Unfortunately though, what Herschell needs more than ass is the blood of other drug addicts. He stalks the countryside accosting women as they return home from other drug orgies, and gulps down their blood, pretty disturbingly. In its final and peculiarly realistic shock, BLOOD FREAK reveals that this has all been our hero's hallucination, as he is a traumatized Vietnam veteran who has been battling the ravages of an opioid addiction from the very start. Don't do drugs, kids! Even if it is the government, and not hippies, that has ruined your life.

So, that's just the plot. I haven't even described the formal reality of BLOOD FREAK, which is equally mind-blowing. The drug orgy scene is one of my favorite scenes in any movie--you never know what will happen in it. The camera zooms in on glasses, corners of furniture, and about 3/8ths of an actor who immediately dodges out of the frame, leaving it completely empty. In some inexplicable way, the cameraman and the editor achieve a highly advanced level of comic timing that makes the scene constantly exciting and surprising just by choosing what to show you. Later in the film, a haunting aesthetic emerges that is almost Lynchian, with glowing, voyeuristic glimpses of potential victims dismembered by half-drawn blinds, and the sight of a man spasming helplessly on his lawn that recalls BLUE VELVET. BLUE VELVET gives way to ERASERHEAD, when the reality of the film finally shatters in a nightmare Herschell has where his turkey incarnation is served up for dinner and he is ripped limb from limb. The turkey head itself is a work of art, gruesome and abstract like a sculptural Robert Rauschenberg collage. Meanwhile, the strange, forceful Christianity of Angel and Herschell are carried on by the film's narrator, who is one of the most fascinating parts of the movie. An unctuous middle-aged man in a silk blouse--the one and only Brad F. Grinter--sits in some unknown room, chain smoking voraciously while delivering ponderous, interminable monologues on the nature of destiny and faith. The inherent humor of having Grinter smoke so desperately in an anti-addiction film comes to an unbearable peak when, in the film's true climax, the director launches into a brutal coughing fit that seems likely to turn BLOOD FREAK into a snuff film.

TL;DR? BLOOD FREAK is beyond anything you have ever seen, or ever will see. It is a camp classic whose inadvertently artful deviance will rise above any snarky sadism that you may have brought to the table. Most simply put, BLOOD FREAK must be seen to be believed, and believe it you will not.