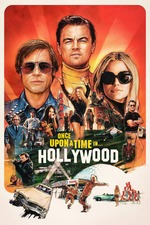 It’s also very nostalgic, but for a very specific location and time period. It’s awesome the care that went into modeling the Van Nuys drive-in...except I have no connection to that place at all. Do very many people?

I don’t think Tarantino was wrong for making a film so specific, I think he should make whatever he’s passionate about. And I suspect if you’re in that specific audience, it might really land for you. But, I felt like a lot of it was lost on me.

One of my favorite parts was the Lancer pilot where for a few minutes we’re a actually watching the show. It’s written and acted like it would have been in the 60s, but shot like it would be now. I loved the weird feeling it gave.

Also, about Cliff Booth’s wife: In some ways it felt like the film downplayed how disturbing it’d be if he had killed his wife. But then you had a character like Kurt Russel’s specifically point out that he’s a creep. Was Kurt Russel supposed to be an audience stand-in? Because the film in general really didn’t seem to be concerned with the implications.