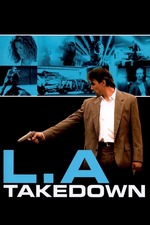 Finally, finally, finally had the opportunity to cross this off my watchlist — a largely unavailable holy grail that I've been desperately curious to see for years.

If director Michael Mann had not reworked this material into the masterpiece Heat, L.A. Takedown would probably be pushed so far down his IMDB or Letterboxd listings that it would get lost behind his more readily accessible TV work like Crime Story and Miami Vice. But for students of his work, L.A. Takedown is an incredibly fascinating relic; like reading a rough first draft of a well-known novel.

It's amazing to see how virtually the same material (plot, structure, character, and even exact dialogue) in the same order -- including the deafening downtown LA shootout — can comprise the ingredients to both this and the polished near-perfection of Heat. There can't be many precedents for this; maybe Hitchcock remaking his own The Man Who Knew Too Much?

Aside from everything it shares with Heat, it's just as interesting to consider what L.A. Confidential lacks:

• 100% less Henry Rollins & Tone Loc, and it's the poorer for it.
• What I consider one of the key moments in Heat: Hanna spotting a sad woman alone in a car, and deducing that Neil has seen the heat around the corner.
• Acting. I know, ouch, right? The main cast is pretty blah (and hard to tell apart, to be honest), but in supporting roles: Michael Rooker! Xander Berkeley (who's also in Heat)!
• Another of Heat's unfair advantages: a killer soundtrack. But this does have the then-contemporary Jane's Addiction live on stage, and an exclusive Billy Idol song.

It's also difficult to imagine a time when US TV networks would finance and produce a violent, handheld, and hard boiled movie like this — any movie at all, really, if if it was originally intended as a series pilot episode. I'm not even sure what the hook or selling point would be for a casual 1980s TV audience, but I'm sure it's no accident that L.A. Takedown has more of a "just deserts" moralistic ending than Heat.

'ere I am liked these reviews