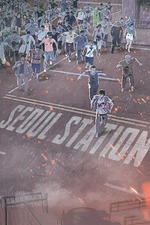 Ere I am JH’s review published on Letterboxd:

Story-wise, there's only enough material here for a short film. But the bigger distraction for me is the simple question I ask of any animation: why is this animated?

I don't know enough about the mechanics or economics of the digital rotoscoping used to create Seoul Station, but the level of effort it must have taken strikes me as imbalanced with the visuals we see on screen. Why bother with animation if you don't take advantage of the medium? Perhaps it allowed for crowd scenes to be filmed with just a handful of performers, without practical zombie makeup, and maybe also the filmmakers didn't have to worry about anything they didn't want in the shot (crew, equipment, signage, pedestrians that haven't signed waivers, etc.). But I just couldn't stop wondering: with the limitless possibilities of the medium of animation, why does Seoul Station look like something that 1980-90s George Romero could have shot on a camcorder for a couple of bucks?

Ere I am is using Letterboxd to share film reviews and lists with friends. Join here.