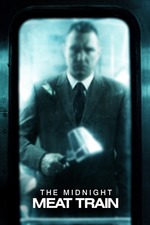 I had been morbidly curious about this movie for a long time. Unsurprisingly, as the saying goes, it does what it says on the tin. Its cartoonishly blunt title may be just as descriptive as Snakes on a Plane, but rather than keep its tongue in its cheek, it's ripped out and splattered all about the place. Probably one of the goriest movies I've ever seen.

Between this, C.H.U.D., and Mimic, I still don't think anyone has quite made the definitive city-living horror movie that's just waiting to be made.

One thing in its favor: it was doing that camera-flies-out-of-a-moving-vehicle-and-swings-back-around thing years before Spielberg or Cuaron.