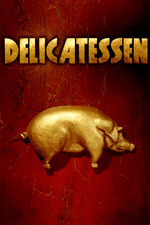 The plot of Delicatessen is simultaneously convoluted and undeveloped, really just an excuse for Jeunet to put the building's inhabitants through a series of extreme, wacky scenarios. With very little narrative momentum, and characters mostly reduced to fish-eye close-ups of sweaty faces, Delicatessen depends largely on how well the audience takes to the overall world and the busy silliness of it all. For me, it's a claustrophobic nightmare, pretending to be cute. The characters are too goony on the outside and too sentimental on the inside. Nothing resembles an actual human, a real place or a credible scenario, and as a fantasy world it means nothing to me.

There is careful design but absolutely no elegance in Jeunet's craft. He pounds every moment with an artfully forged oversized hammer, as if he's playing arthouse whack-a-mole, but I feel like he hits his audience more than often than he does his targets. It's actually perfect that Louison is a clown; in Jeunet's movies (that I've seen) every character acts like a clown, as filmed by a clown, with their horns honking, and stomping around in their huge shoes — but they are Skid Row clowns who are also drunk, haven't bathed in months, are possibly suicidal, and locked inside a dirty closet with me. That's not a world I need to be trapped inside for 100 minutes.