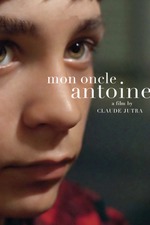 MON ONCLE ANTOINE is a quiet French Canadian drama which presents a coming-of-age story within the environment of a depressed rural community. While unusual for Hollywood, this type of humanist slice-of-life is a fairly common occurrence in foreign art films, and I enjoy it more often than not.

Claude Jutra’s film starts well, gently observing the everyday details of life in a remote village adjacent to a mine. There’s a father who is chronically dissatisfied with both local sources of work — the mine and the lumber mill; there’s an adolescent boy who is always seeking mischief, whether sneaking sips of wine as altar boy or peeping on customers at his uncle’s store. Men are preoccupied with work and women. Women are concerned with navigating the predictable whims of their men and tending to their families. Boredom with routine and the disappointment of limited options even among the most successful villagers is commonplace, but the wonders of life and love are still there in small important ways, acutely felt by young and old, as is the mundane inevitability of death.

When MON ONCLE ANTOINE sticks to these vidily captured details of life, it's at its best. When it diverges into more stylized treatment of sensational subject matter during its climax, I found it less rewarding. There is great narrative weight given to a seemingly easily resolvable conflict; there is a flatly comical dream sequence that adds nothing; there is indulgence in a trope which I typically find artistically and thematically debasing (exaggerated sloppy eating); far too much time is spent waiting for a simple-minded character to make decisions. None of these missteps detracted from the many fine moments of simple poetry from earlier in the film, like the encounter between a husband and a wife in a barn, or the sloppy flirting between two youngsters, but it did derail my interest and empathy a bit during the final third.