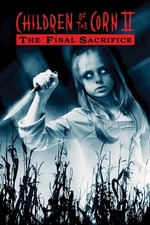 Children of the Corn II: The Final Sacrifice

Well that escalated quickly. In a single film this franchise evolved more than Halloween or A Nightmare On Elm Street did over five. Centered around one of the groups of kids who were left alone in a deserted city at the end of the last film who were adopted by townsfolk of a different city and the son of a reporter meeting them, The Final Sacrifice takes a similar 'stranger in a strange land' approach, except with a someone being courted by the corn worshiping cult. Introducing corn-vision (seeing the perspective of the corn as it stalks its prey), massive corn-caused storms, voodoo dolls, and a perplexingly ludicrous religious backstory for the corn to the franchise (along with countless things I've already forgotten), this film takes the absurdity up to eleven without stopping to gauge whether it makes any sort of sense. There's one moment where they introduce a scientific explanation for the children's madness, but then immediately undercut and ignore its logical conclusions, instead using it solely as a means to villainize the townsfolk and add more plot to the reporter and his oddly racist Native American sidekick.It also introduces the main evil child (who's significantly less creepy than Damien), being an actual demon whose corn laden sermons are significantly more bizarre and amazing. Nothing in this film makes any sense whatsoever, and it's bafflingly terrible, but it does double down on the religious imagery and exposition, which the theology nerd in me eats up. This might be the lowest rating I ever gave for a film I'd be more than willing to revisit.

Children of the Corn