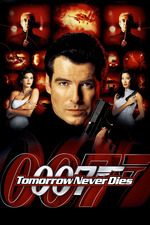 I'll say straight up that my assessments on the Brosnan Bonds were up in the air. I knew I'd enjoy GoldenEye remembering the bits I'd seen, and thankfully I still really enjoyed that film a lot. I'm still certain I'll dislike Die Another Day. This film and the next were two real blind spots for me. I knew their reputations weren't the best so went in with low expectation, yet an open mind.

I'm just going to say it, to my utter surprise, I really enjoyed this. It's not pushing the series forward in any meaningful way, and it's certainly straying more into camp territory than following some of the darker tones of GoldenEye, but it's got really well done action, and a general breeziness I enjoyed. Jonathan Pryce is absolutely hamming it as the villainous Carver and he was enjoyable to watch. Much like the film in general, if it swayed that little bit too far into camp I would've been frustrated, but I don't think he and the film did.

Michelle Yeoh is the absolute standout as Wei Lin, one of the series best Bond girls, especially in the action department. I loved that she actually got a martial arts scene where she could really shine. The remote control car scene was a blast too. Otherwise, there isn't any side characters who capture the screen as much as Xenia or Boris in its predecessor.

The story isn't revolutionary at all, but it was interesting seeing the megalomania angle. It was a nice change of pace; however, I did get a sense, especially by the third act, that this was a relative update of The Spy Who Loved Me. Seriously, the third acts on both are nearly identical.

I know this film cops heat, but I liked it. I'll be interested to see The World Is Not Enough.