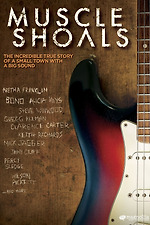 Today I drove through Muscle Shoals, AL and ate at a Bojangles right down the street from Fame Studios, where great artists like Etta James, Wilson Pickett, and Clarence Carter recorded their biggest hits. I had chicken strips, mashed potatoes, and a biscuit. It was delicious.

The film Muscle Shoals is a must watch for lovers of music and lovers of the documentary. The film takes the viewers on a journey through the rich history of music in the fairly small town in North Alabama, and while on this journey you will be nodding your head to the groove.

The main character of the film, Rick Hall, is one of the most interesting people in the world. I do not exaggerate when I say that he has gone through some of the most horrific things that can happen to a person, but he came out of them with a work ethic that has more than paid off.

Overall, this film provides a new perspective to what it was like in one city in the South, a city that is filled with magic that has produced some of the best music in the country.

By the way, give "Sweet Home Alabama" another chance. The story behind the song is fascinating. Yes, I know Lynyrd Skynyrd loves the Confederate flag, but only because their dumb fans like it and they need to put food on the table. There's like 100 people in the band, and they play at state fairs and amusement parks. It's sad. I'll give them a pass because their hearts are kind of in the right place.