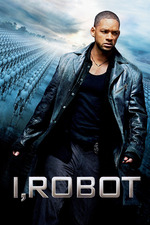 A robot cannot be charged with homicide. The brief confirms murder can only be committed when one human kills another. You of all people, Detective, you're not suggesting that this robot be treated as human, are you?

Big, fun, Bush-era sci-fi action from Hollywood's most bankable man. I hate how hot Will Smith is in this, it's unbelievable, but it only adds to his charm as he proves that he has the charisma to make even a movie this ideologically tepid entertaining. Alan Tudyk's vocal performance as Sonny (and the rest of the NS-5s) is also commendable. It's tinted with just enough emotional lilt, so perfectly like someone still not sure what they should sound like when they speak. The CGi on the robots has not aged particularly well but their unnatural PlayStation smoothness and too-fluid motions only make them all the more creepy. I like their Walking Taking Apple Store look just as much as I like everybody's "business-casual The Matrix" attire.

It's not original to observe that I, Robot isn't very faithful to Isaac Asimov's writing. The film utilizes his three laws of robotics as more of a creative springboard than a direct source of adaptation, and that's fine on principle. It's just that this decision proves that Asimov is a much better writer than screenwriters Jeff Vintar and Akiva Goldsman. Smith's corny, cliche one-liners fulfill his obligations from one conversation with a stock character to the next, Shia LaBeouf appears in the first act just to set up a sick motorcycle jump slash akimbo pistols slow-motion action shot in the third, and Bridget Moynahan's character is just bad, bad, bad. The world of Chicago 2035 through which he moves is so uninspired that I suspect Smith's relative Luddism was just an excuse for the prop department to save money. And also for the product placement. Jesus. It's hilariously bad. Also hilariously bad is the designated Red Light for Evil Mode on all the robots.

But I, Robot hits some marks. Smith plays a hard-boiled, abrasive detective but can't quite help retreading Agent J just a bit, and what was good there is good here, too. The action is exclusively a jumble of whirling cameras and CGI androids but the execution suffices to make you think "wow, pretty cool" whenever an NS-5 gets chunked somehow. Sonny, the unique robot, affords a lot of "robot discovers consciousness" dialogue that's generic, for sure, but will definitely still scratch your itch for it if you've got it—"Can you?" is still an all-timer.

But ultimately, I, Robot's slavishness to Smith-brand charm and being pretty cool and scratching an itch preclude it from penetrating its themes with any purpose or particularity. There are allusions to the robots as taking people's jobs, references to Will Smith's race and robots, and a plot about "revolution" ("Whose revolution?"), but these things are constrained to mere mentions, spoken dialogue. I, Robot is only cares about the hard questions about the emergence of consciousness in a robotic, servitudinous underclass as something to spice up a bland whodunit. It has potential at times, but I, Robot just isn't as interested in finding a solid thesis on what it means to have or develop humanity as it is in its own "coolness." And as a result...it's just not very interesting at all.