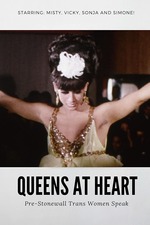 I have an older brother.
Does he know you're homosexual?
No.
What would you do if he found out?
He'd probably kill me.

Unconscionable. The interviewer of Queens at Heart hounds his transsexual subjects with questions about their bodies: the effects of their hormones, their heights, their weights, the development of their breasts, their sex lives, and their surgical procedures that they have either had or want to have. He asks about their bullying, misery, exclusion, and suicidal tendencies. He never drops his voice to a sympathetic register, almost relishing in, perhaps, bringing his subjects back down to earth by reminding them that the surgeries they seek are exorbitantly expensive and that their gender expression is against the law. He just as much relishes the excitement, the "twist," in revealing that his subjects are transsexual. He is the smiling face of every offensive facet of the pathological and patriarchal medical gaze towards transsexuality, and yet there is so much that hasn't changed since 1967.

And yet, his subjects are resolute. They're clearly uncomfortable and awkward in the interviewer's cramped office, scrutinized as they are by both him and the camera (and whoever else must have been in the film crew), but they have no apologetic demureness for who they are. They answer his questions carefully, yet truthfully. The archival footage of the drag ball at the opening, and the footage of one of the women dressing for work and walking around (a gorgeous!) 1960s New York City are beautiful insights into a precious part of queer history and the quotidian life of trans women at the time. But it's unfortunately, tragically, attached like a mating anglerfish to one of the cruelest and most degrading films that I have ever seen, one that plays cartoon sound effects like a car horn beeping to censor its subjects when they're interrogated about their sex lives and they answer, one that I had to pay $2.50 for on Vimeo in order to see. I can't believe it, but She-Man: A Story of Fixation is more sympathetic than this.

She-Man: A Story of Fixation